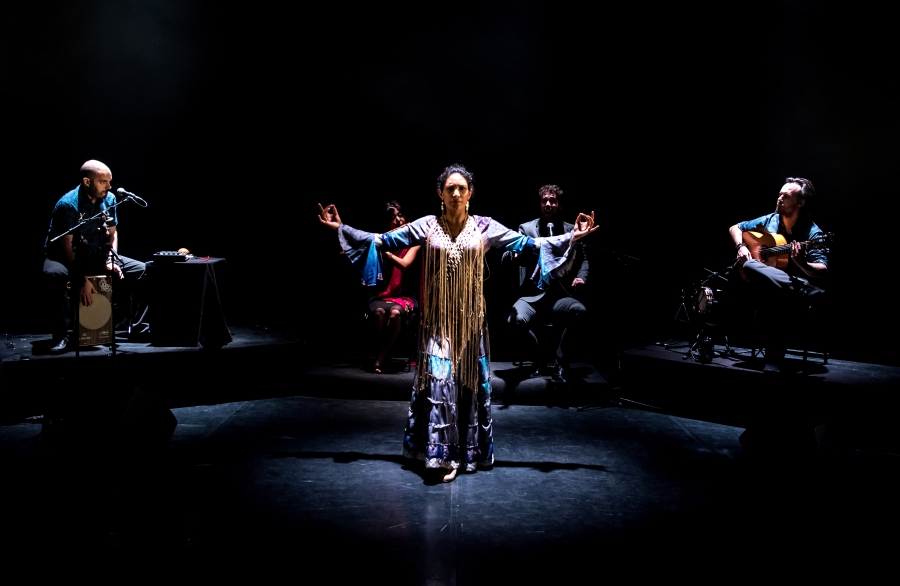 Caravan World Rhythms presents the North American premiere of La Caramelita Flamenco Company in “Nritya” – a Voyage of Rhythm, Music and Dance from India to Spain.The company includes performers from Spain, France and Canada, including dancer/artistic director Deborah “La Caramelita”, Alejandro Mendía on vocals, Guillermo Guillén on guitar, Alex Carrasco on percussion and Lara Wong on flute and bansuri.As a first generation Canadian, born to Malaysian parents of South Indian descent, Deborah “La Caramelita” has enchanted international audiences for over 10 years with her unique style of dance. Her new show “Nritya” tells Deborah’s story through dance, a story of an immigrant family and an artist connecting with an art form that seems totally foreign, but one that she is historically linked with.

“Why Flamenco and Indian music?” It is a popular theory that the Roma people, who have greatly contributed to the creation and culture of flamenco, came from Northern India to Andalucía many centuries ago. Through this show, Deborah ” La Caramelita ” performs an initiatory journey in search of her origins but also a reconstruction of bridges that had disappeared between flamenco and its Roma-Indian roots.

From the beginning of the performance and after a few seconds of observation, the viewer will think “but where are the Indian musicians?” This is the challenge that the four versatile musicians wanted to take up. They have researched bridges between flamenco and certain Indian styles, but using their own capacity as artists. The result isn’t an Indian flamenco fusion show but rather a personal story told using both elements.

Deborah “La Caramelita” began her flamenco journey in Vancouver, where she grew up. Her passion lead her to Andalucía, Spain where she studied with exceptional dancers such as Juana Amaya, Andres Peña, Mercedes Ruiz and others. After having lived and studied intensely in Andalucía for several years, she moved to France where she has an active dance performance and teaching career, but she often returns to the cradle of flamenco in Spain to perfect her art with renowned masters of flamenco dance.With respect to her Indian heritage, Deborah “La Caramelita” has created many parallels to these rich origins in her dance. It is said that the Gypsies who established, and continue to guard the essential character of flamenco, came from India. As a young Indian growing up in Canada, this history drew Deborah to flamenco and remains an important part of her artistic influence. In her most recent artistic endeavors, she reconnects with her past by integrating the influences of classical Indian dance into flamenco.